V/A Nobody Knows This Is Somewhere LP 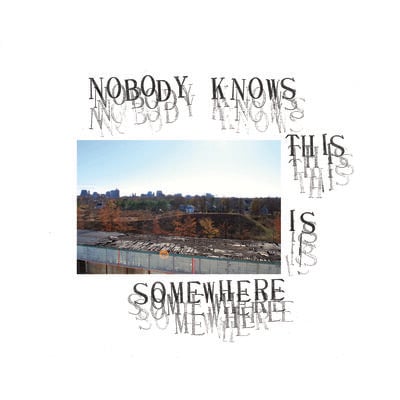 New Haven, Connecticut has become an unlikely hotbed of psychedelic activity in the last half decade. In truth this scene has developed over the course of much more than five years - decades of friendship and tight knit community have gradually birthed this vital scene and brought together its diverse artists into unique union. Nobody Knows This Is Somewhere seeks to document one subsect of New Haven’s scene, the deeply intertwined family of friends simply known as The Crew.

Side A of Nobody Knows This Is Somewhere opens with Headroom’s “Over Easy,” a track that eases in with a relaxed stride and builds with confidence as it struts forward into a full gallop, only to collapse into the infinite abyss of feedback. The band’s leader Kryssi Battalene plays powerful, ultra-sustained guitar leads that bring to mind the likes of White Heaven’s Michio Kuihara, while the rest of the band is able to patiently build to a triumphant peak in the same vein as Marble Sheep’s finest jams. However, the true climax of the track comes when David Shapiro jumps in for a rare dueling solo with Battalene - making this amongst Headroom’s best moments thus far. Track 2 on side A is from Headroom’s third guitarist Stefan Christensen. The past few years have seen Christensen steadily releasing some of the best homespun, outsider psych around today. On “Commute” he weaves together lush guitar tones, thumpingly amateur piano and a few happy-tape-accidents into a distinctive 10-minute piece. Aided by his masterful working of the Yamaha MT8X, the track features dynamic fluctuations and abrupt yet natural shifts. “Commute” comes from Christensen’s not-intended-for-release archive of attempts to mimic, but not cover, his influences. This particular song aims to fuse two sides of a New Zealand lathe-cut and does so with such cunning that it becomes its own individual piece.

Opening side B is a sprawling guitar and organ drone from Alexander AKA David Shapiro. Typically known for his nuanced steel string fingerpicking, Alexander plugs in, turns up and plods forward with this deeply meditative arrangement. This track calls to mind Shapiro’s decade plus of work with Ian McColm as Nagual (now renamed Center with the addition of Christensen to the group). The side continues, and the record culminates appropriately with Mountain Movers. Movers are arguably the harnessing focal point of The Crew, with this particular lineup of the band having lasted nearly a decade and bringing two generations of New Haven musicians together. Led by songwriter Dan Greene, Mountain Movers have evolved to not only play his tunes but also to improvise with one another on stretched out jams, like the one included here. “Deep In The Valley” nearly made its way onto their most recent long-player, Pink Skies, but an 11th hour decision reserved it for this compilation. The jam features interplay between Greene and Battalene’s guitars that ranges from relaxed, nearly Classic Rock tunefulness to full on blazing hiss and howl. Meanwhile, Ross Menze and Rick Omonte (also Headroom’s rhythm section) guide the jam with an expertise that allows for several peaks and valleys, with Menze’s full-Animal-style drum madness ultimately taking over and bringing listeners to the true pinnacle.

Time and technology have rendered the scene comp largely useless (and perhaps compilations in general). Despite the format’s long and fabled history, streaming platforms have made it simple to check out massive amounts of music and destroyed the need for several artists to be captured on a single record. Not to mention interconnectedness is less reliant on location than ever before. And so, as this becomes the new rule, the exception must quickly follow. Nobody Knows This Is Somewhere is that exception. It showcases a scene of deeply connected artists whose influence on one another demands documentation together.